Less than 10% of all venture capital deals go to women, people of color, and LGBTQ+ foundersEdit

Other venture capitalists see this as a pipeline problem. Backstage Capital sees it as the biggest opportunity in investment.

Backstage Capital catalyzed the conversation around investing in underrepresented foundersEdit

By investing in more than 160 companies since 2015, Backstage has provided founders with necessary funding, opened the door to the venture capital ecosystem, and led the way for a new approach to venture capital investing.

From Founders of Backstage Portfolio CompaniesEdit 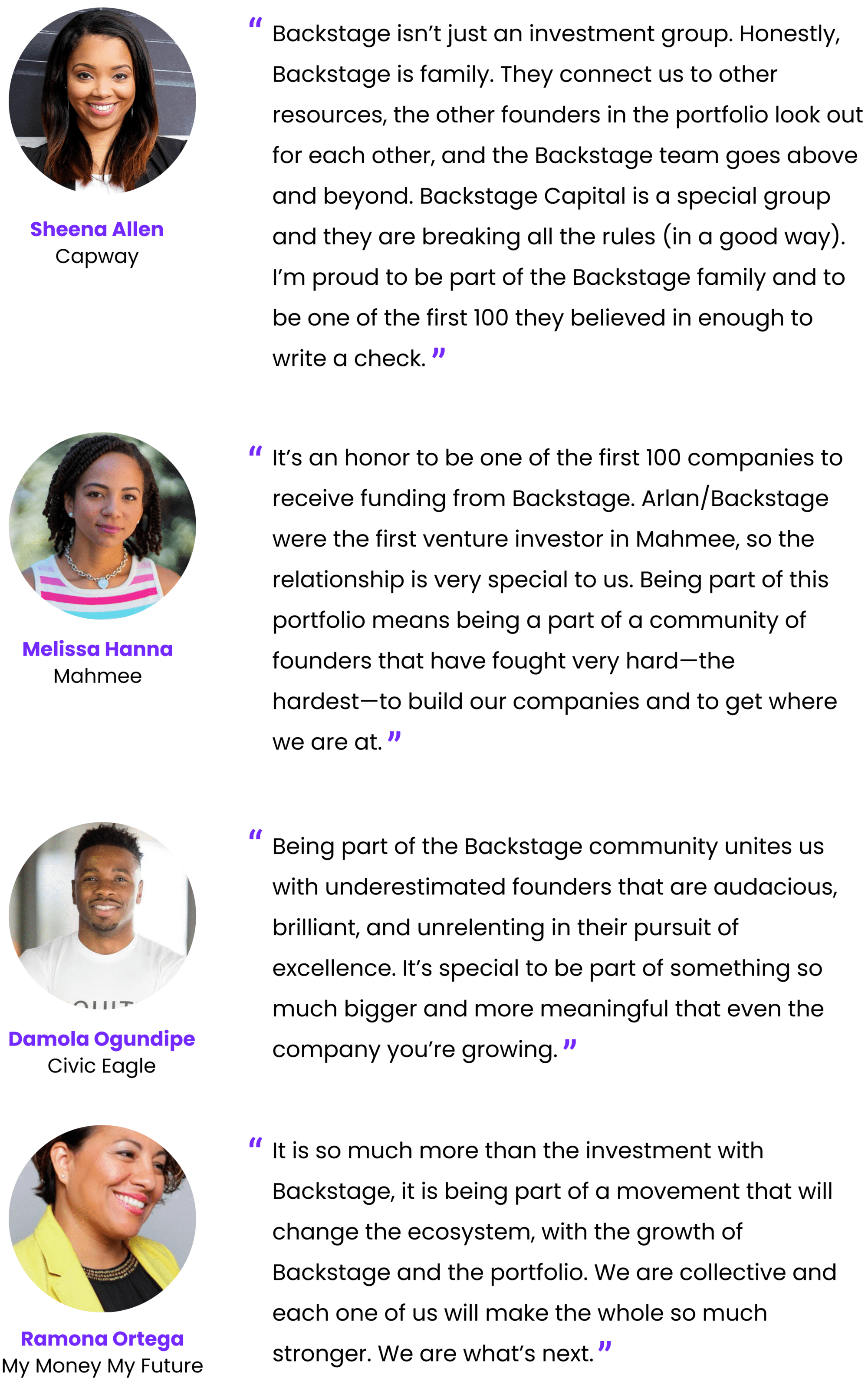 Opening up opportunity to the larger investment communityEdit

With a sector- and geographic-agnostic approach to investing, Backstage’s companies are in nearly every industry and are headquartered in cities like Minneapolis, London, San Francisco, Detroit, and Los Angeles.

In 2020, Backstage expanded our community to include emerging investors with the launch of Backstage Crowd, our funding platform where accredited and non-accredited investors can invest alongside us into underrepresented founders. Since launch, 55% of people in the Crowd are non-accredited. Like we provided access to venture capital for our portfolio companies, we are providing access, resources, and education for people who are interested in investing in startups.

We see a massive opportunity to fuel the growth of Backstage Capital further by opening up investment to the larger investment community.

We would like to give everyday investors who share our values the opportunity to be a part of the Backstage journey and help us deploy more capital to underestimated founders. 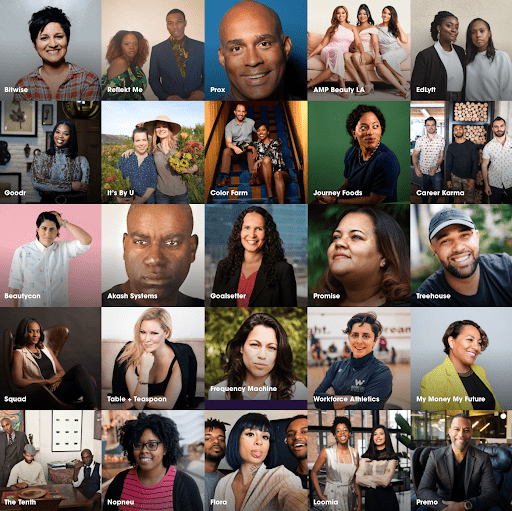 Thousands of founders are part of our community and have applied for funding from Backstage.

Additionally, founders from our first 100 companies have gone on to raise over $250M and create over 500 jobs*.

Backstage has become the brand for underrepresented founders. Awareness of our founder Arlan Hamilton, and our work at Backstage, results in a growing founder and investor community that in turn allows us to have a strong sourcing pipeline. Our investment evaluation process has been featured in Harvard Business School Case Study, “Arlan Hamilton and Backstage Capital”.

*These figures are from 2019 internal reporting.

In September 2020, Backstage celebrated its 5 year anniversary with the release of jOURney, a documentary featuring Arlan, the Backstage Crew, Headliners (Backstage portfolio companies), investors, and more.

Additionally, Backstage released its Impact Report, produced by TP Insights. As Arlan wrote to open the report, "When I started Backstage Capital, people dismissed me and said I would never find enough viable companies to invest in, and that my mission was more about charity than financial returns. I knew the startups and founders were out there, so I ignored this feedback and vowed to invest in 100 of them by 2020. The fact that we managed to do this by 2018 proves that the founders are there." Read the full report here. 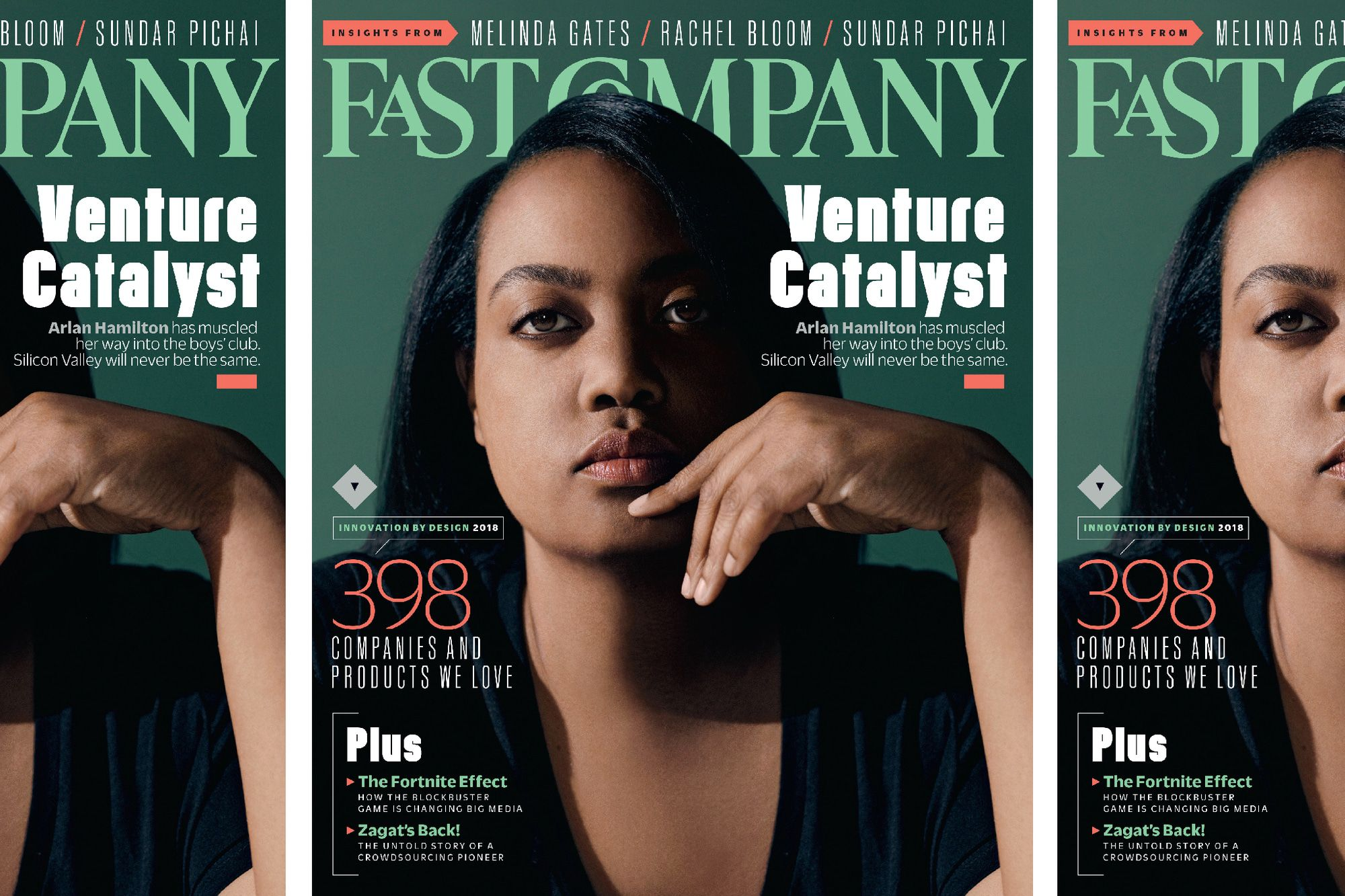 Arlan Hamilton is a remarkable entrepreneur who built a venture capital fund from the ground up, while homeless. She is the Founder and Managing Partner of Backstage Capital, a venture capital firm dedicated to minimizing funding disparities in tech by investing in high-potential founders who are people of color, women, and/or LGBT. Started in 2015, Backstage has invested $12M+ into 160+ startups led by underestimated founders and has been featured in Fast Company, Forbes, Fortune, CNN Money, Inc., Entrepreneur, and Quartz. In October 2018, Arlan was featured on the cover of Fast Company magazine, making her the first Black woman who is not an entertainer or athlete to grace the cover. Her first book, It's About Damn Time, was published by Penguin Random house in May 2020. Arlan also hosts Your First Million, a podcast featuring notable people who have reached their first million dollars, downloads, or customers. 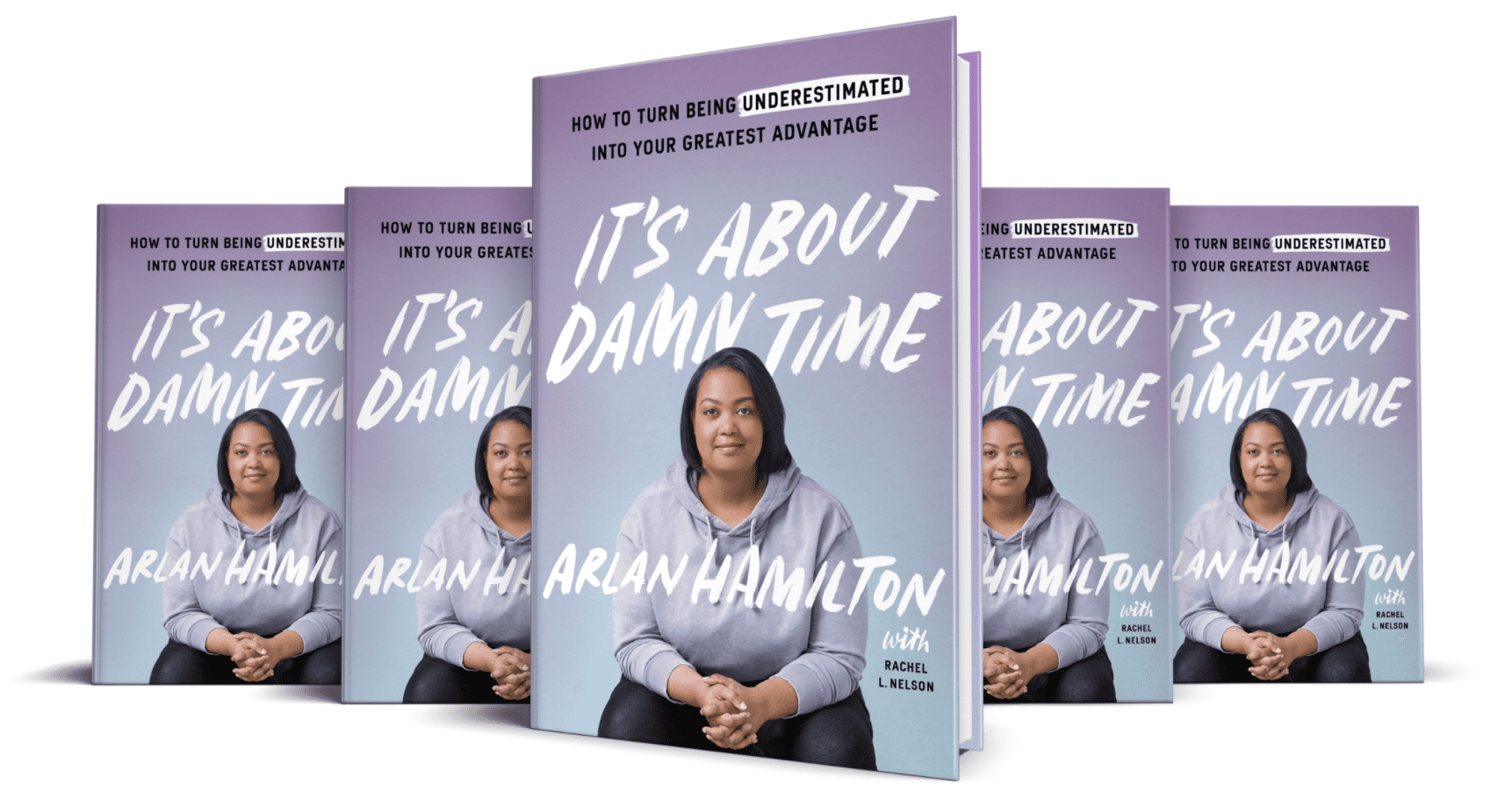 Arlan entered the venture investing world from an unconventional path. Before launching Backstage Capital, she authored the groundbreaking blog "Your Daily Lesbian Moment", which she grew to a monthly readership of 50,000 fans worldwide. She has written for AOL, SuicideGirls, and Curve Magazine, and founded and published the internationally distributed indie magazine Interlude. Arlan is also a live music production professional, having served as a tour manager to numerous international artists including will.i.am, Toni Braxton, and Jason Derulo. Most recently, she worked with Atlantic Records recording artist Janine.

In 2018, Arlan co-founded, along with Investment Partner Christie Pitts, Backstage Studio, a new venture studio designed to build products, services, and initiatives that serve the mission of eliminating underrepresentation in tech by empowering founders and their teams to succeed. In April 2018, Arlan and Backstage Studio were the subject of Season 7 of the popular Gimlet Media podcast, StartUp. In October 2018, Backstage Studio announced four accelerator programs, in Los Angeles, Detroit, Philadelphia, and London, UK. In June 2020, Backstage announced its Crowd initiative, providing access to the best underrepresented deal flow to accredited and non-accredited investors. Arlan was recently named on Fortune magazine's 40 under 40 list, as well as Vanity Fair magazine's The 2018 New Establishment List.

Arlan Hamilton built a venture capital fund from the ground up, while homeless. She is the Founder and Managing Partner of Backstage Capital, a fund that is dedicated to minimizing funding disparities in tech by investing in high-potential founders who are people of color, women, and/or LGBT. Started from scratch in 2015, Backstage has now raised more than $7 million and invested in more than 130 startup companies led by underestimated founders. In 2018 Arlan co-founded Backstage Studio which launched four accelerator programs for underestimated founders in Detroit, Los Angeles, Philadelphia, and London.

Christie is a General Partner at Backstage Capital and co-founder of Backstage Studio, where she leads Backstage's global Accelerator.  Christie has extensive experience creating valuable partnerships between startups and Fortune 500 top 20 corporations, and joins Backstage from her role as a Manager at Verizon Ventures. Christie held a multi-faceted career at Verizon, including running marketing and sales operations for a $4B wireless business. Christie holds a bachelor’s degree in business administration from San Jose State University, and an MBA from University of Phoenix.

Brittany is a General Partner at Backstage Capital and brings experience sourcing early-stage ventures for investment, conducting diligence, and managing an investment pipeline. Prior to working at Backstage, she has led many organizations in sourcing and evaluating early stage deal flow. Brittany was a principal for #ANGELS, where she sourced companies and contributed to the #TheGapTable initiative. She was a Manager at Village Capital where she analyzed opportunities and created investment recommendations in the fintech, education, health, food/agriculture, and energy sectors. She also gained experience supporting entrepreneurs as an Associate at Techstars and as a Mentor at Startup Jamaica. Prior to her work supporting founders, she had her own ecommerce startup, Runway Technologies, and built a solid foundation in finance working at Bank of America Merrill Lynch for 5 years. Brittany received her BS in Business Administration from the University of North Carolina at Chapel Hill and completed her MBA at Harvard Business School. 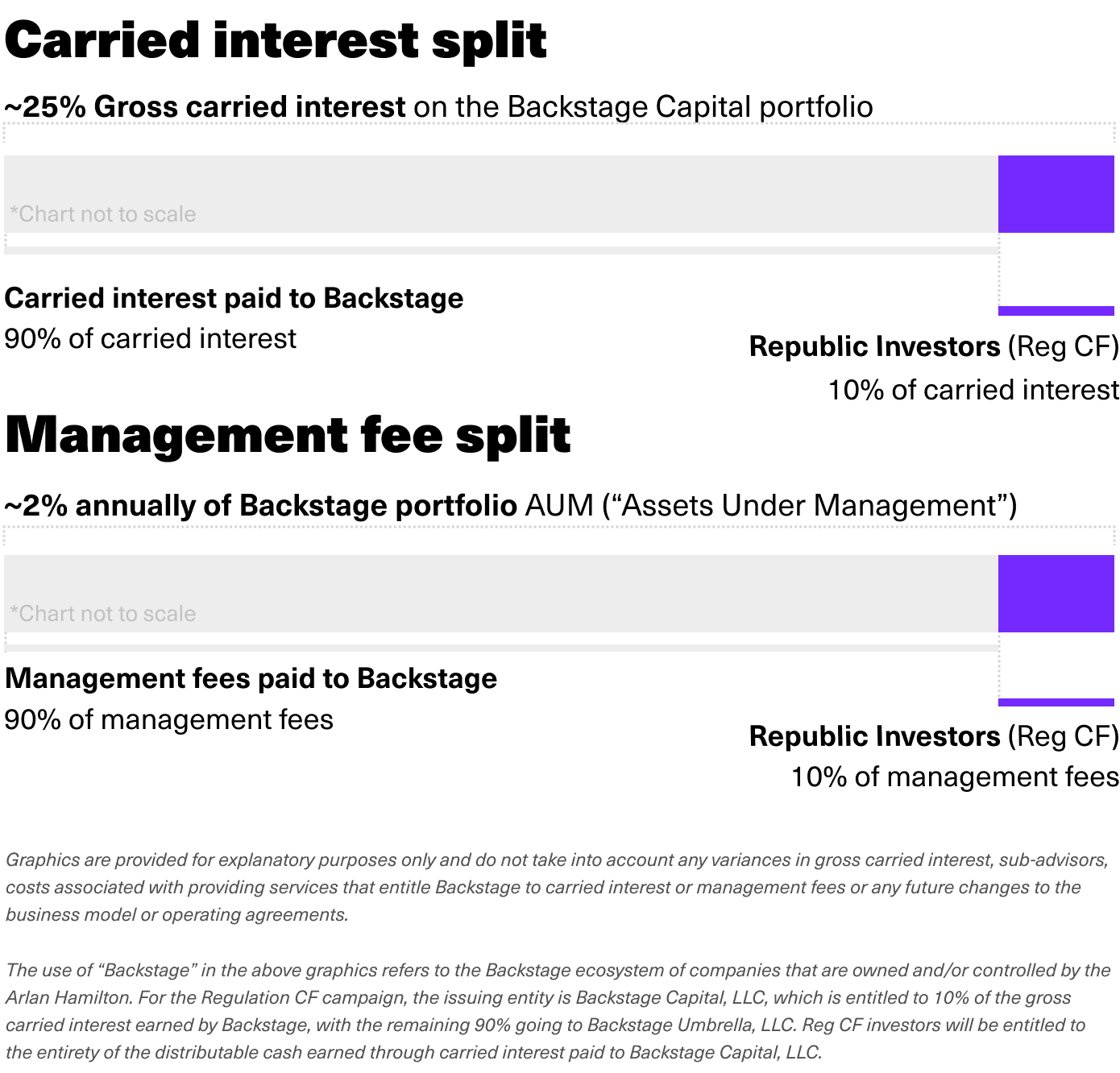 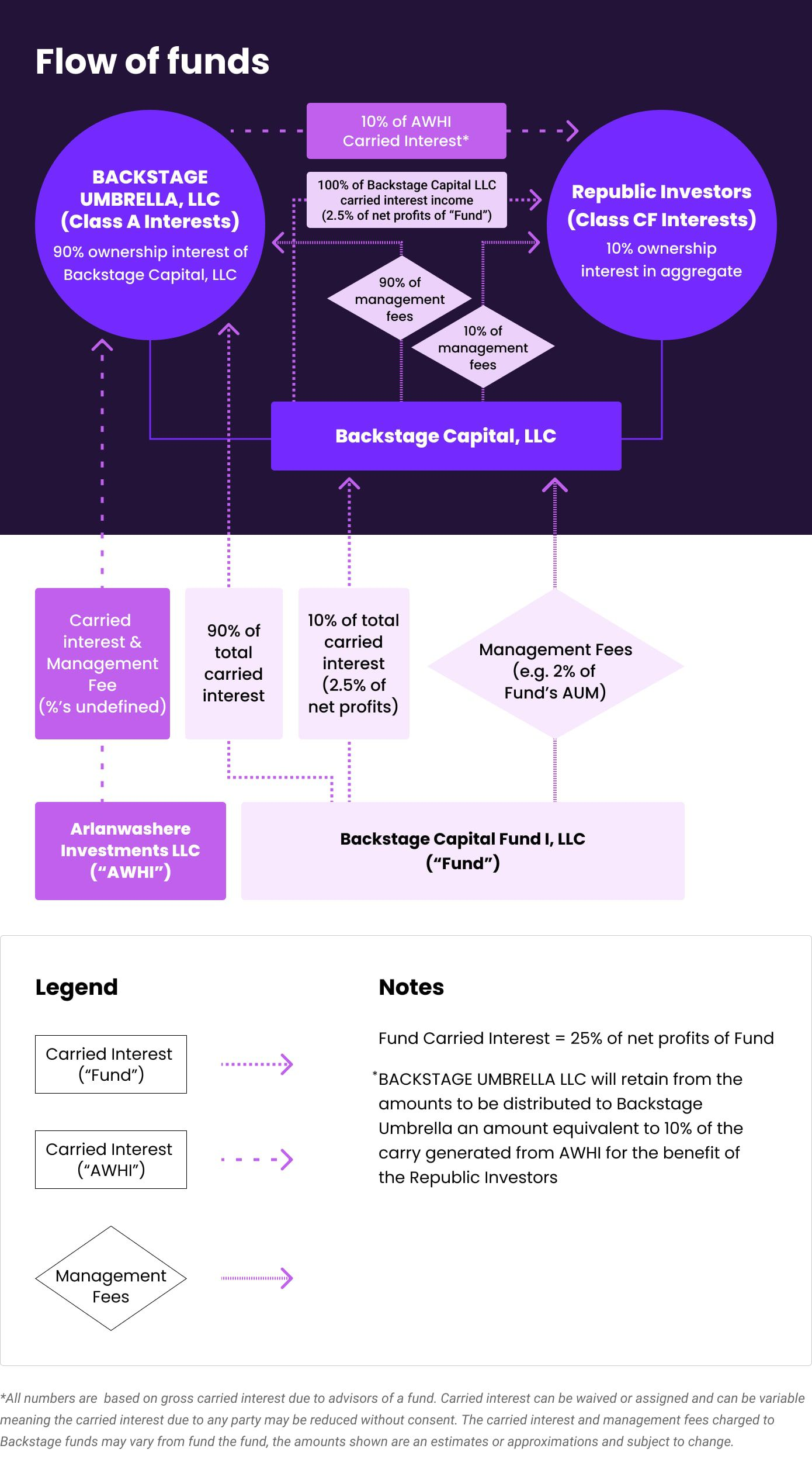 Individual Republic investors now have an opportunity to join Marc Andreessen, Stewart Butterfield, Heather Hiles, Ellen Pao, and the many other investors who believe that diversity is a competitive advantage. 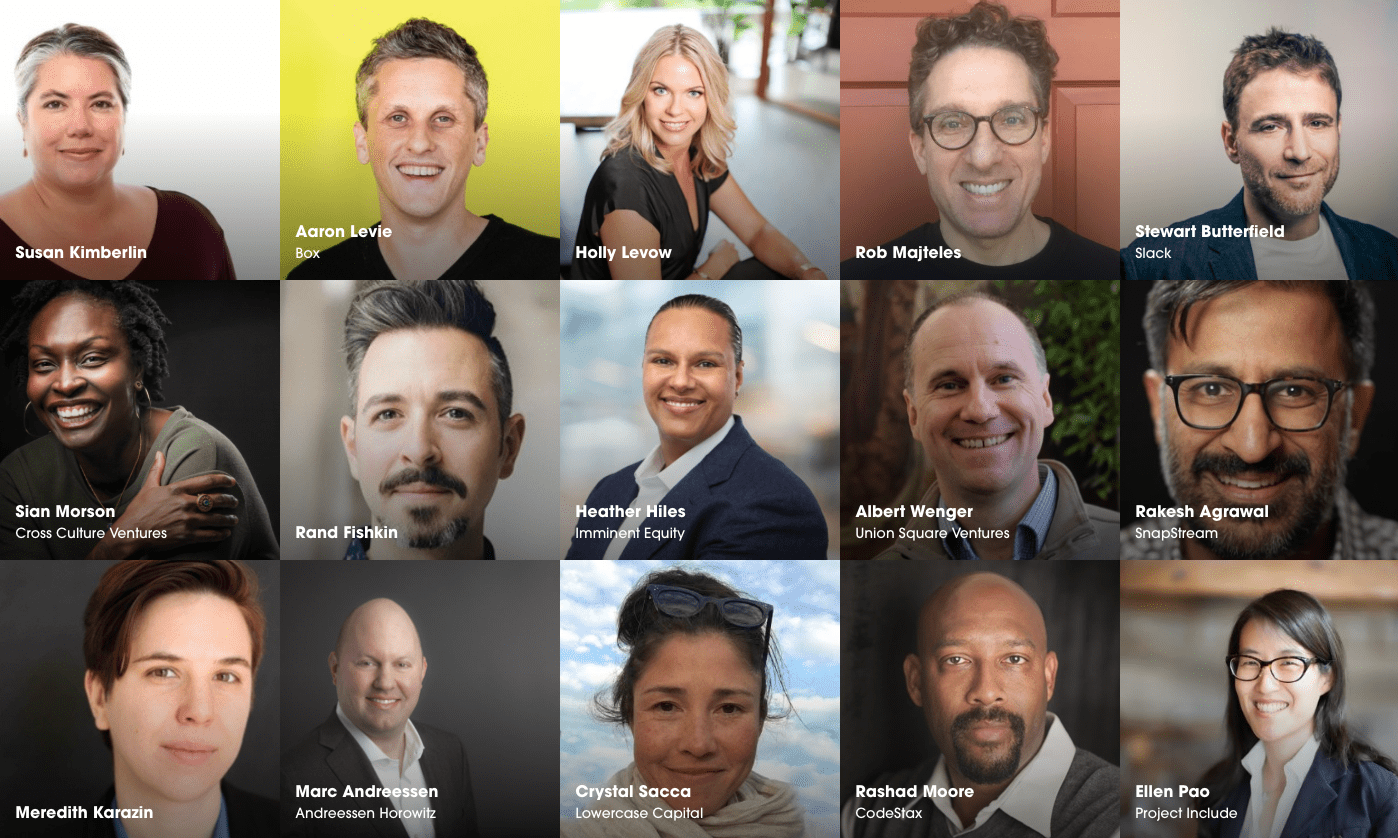 In 2015, when Arlan launched Backstage Capital, she set a goal to invest in 100 companies led by underrepresented founders by 2020. At the time, the misperception in venture capital was that qualified underrepresented founders did not exist - because they were outside the homogenous networks of investors. Arlan knew this was not the case. In 2017, she launched an open application for investment, and more than 1,000 founders applied that year for consideration. By 2018, the Backstage Capital team had met their goal of sourcing and investing in 100 companies led by women, people of color and LGTBQ founders. 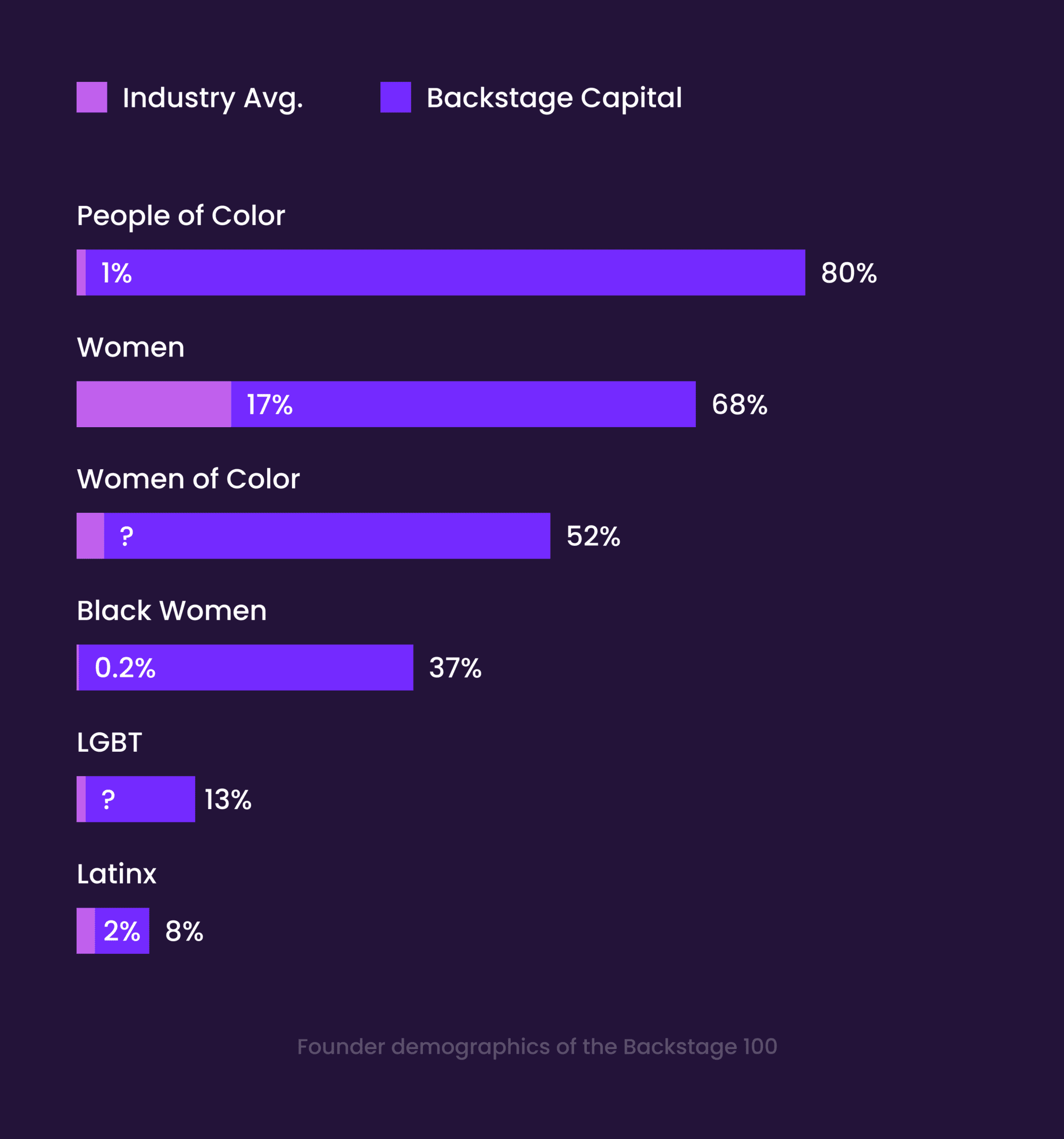 Some of these founders includeEdit 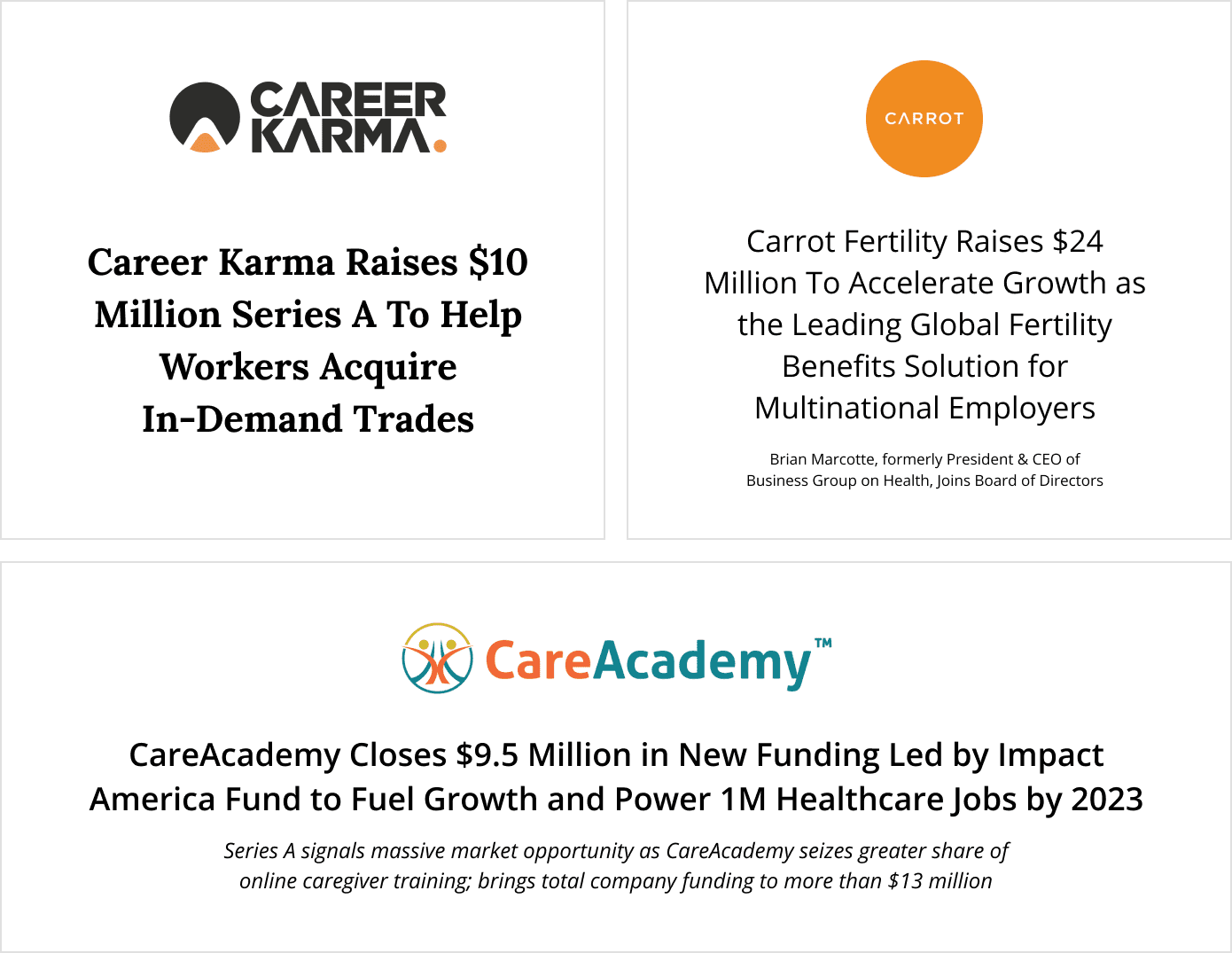 After investing in 100 companies led by underrepresented founders, we spent time researching startup ecosystems and listening to our community, and decided to launch an Accelerator. We announced the program in September 2018 at Techcrunch Disrupt, and launched in London, Detroit, Philadelphia, and Los Angeles in March 2019. 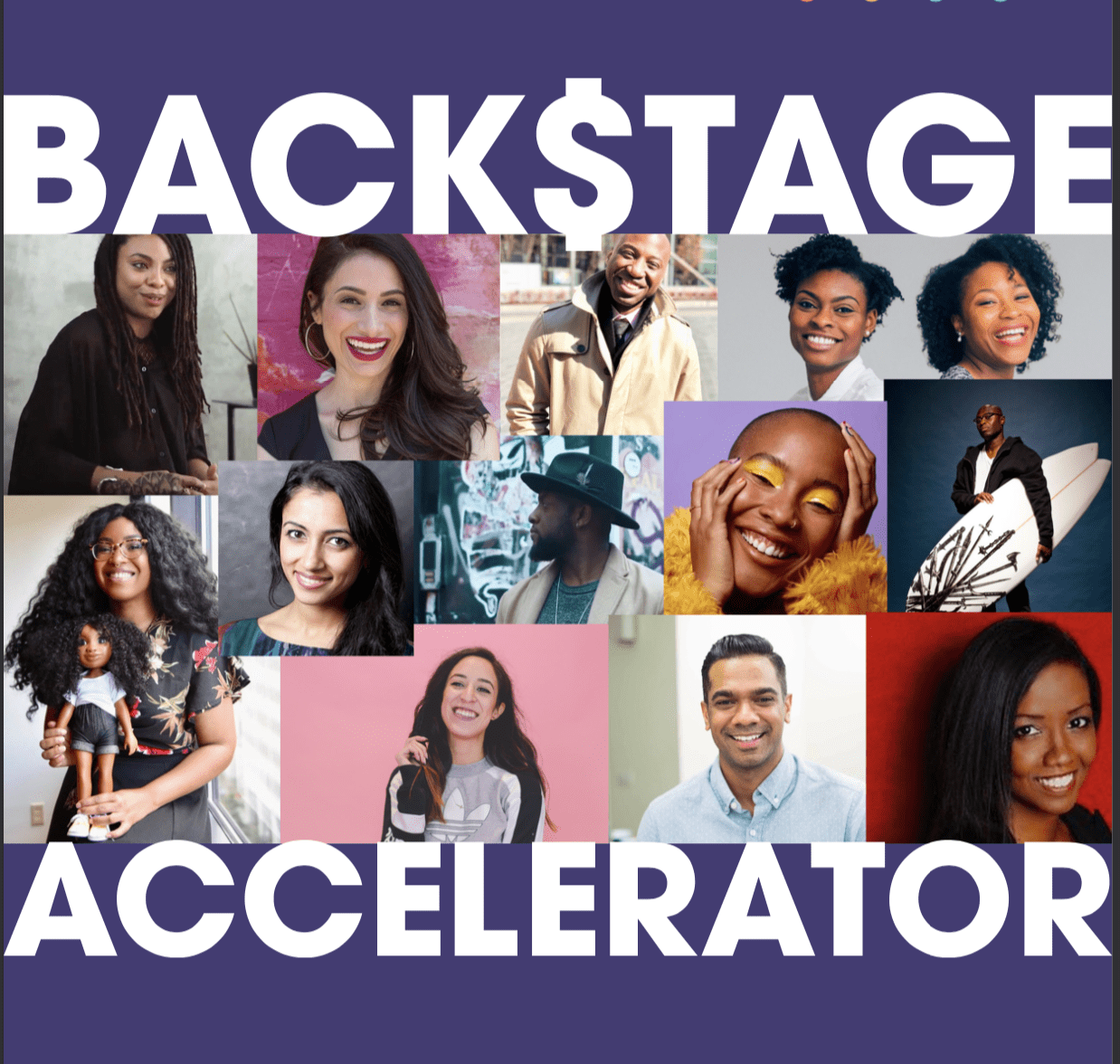 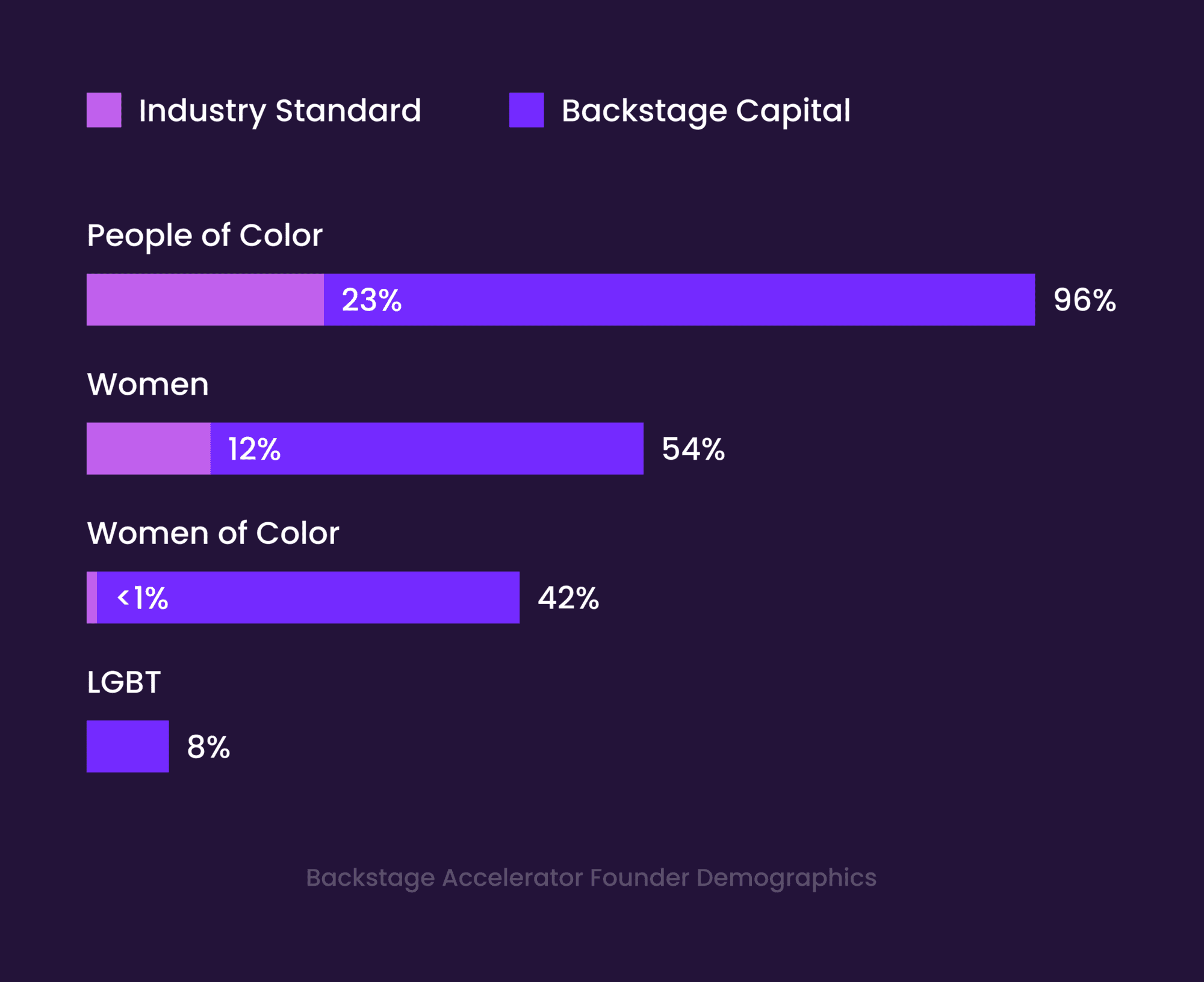 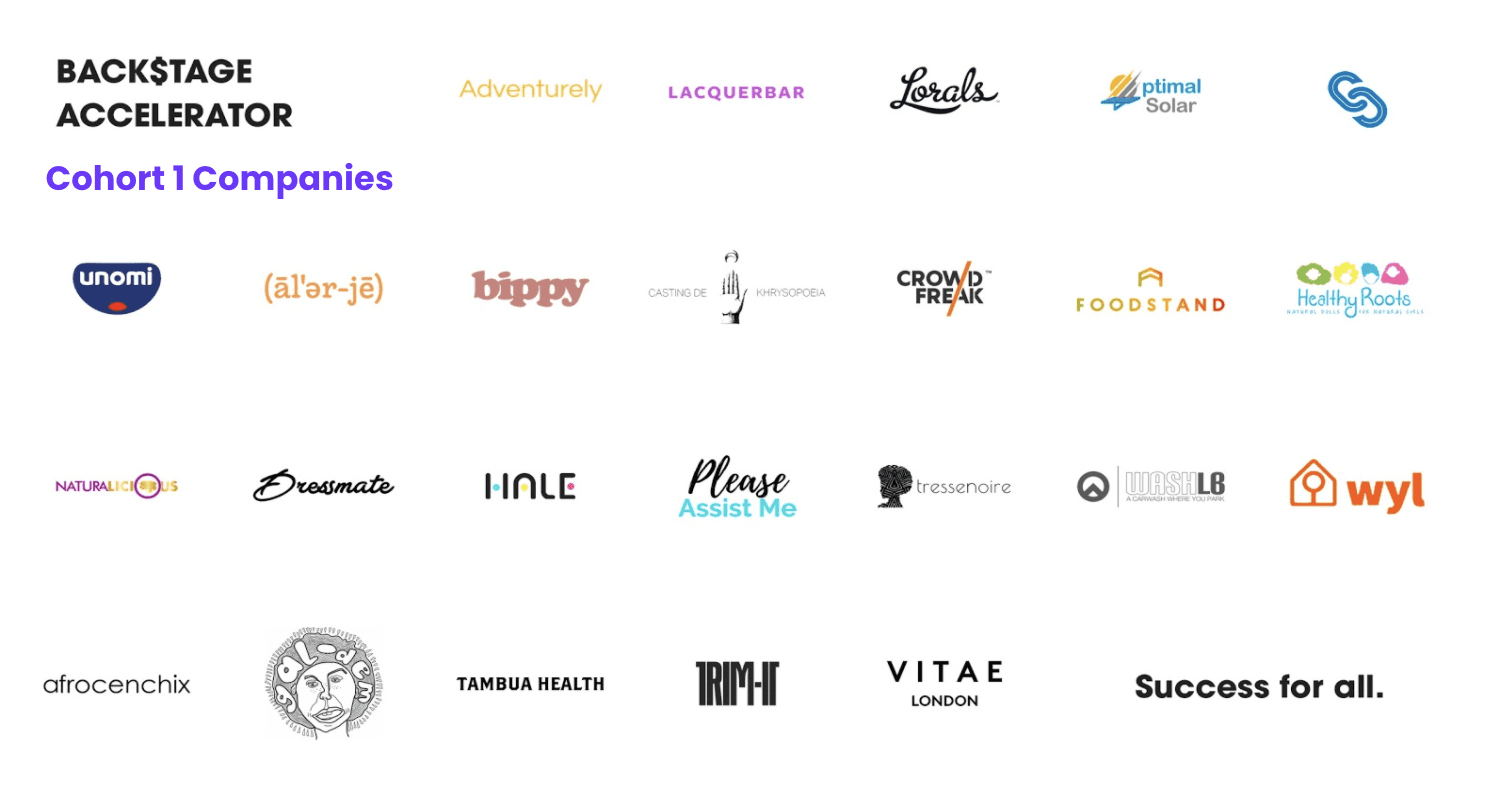 Backstage Accelerator is a 3-month, hands-on accelerator program designed to help founders achieve milestones. We invested $100K each in a carefully selected batch of global cohort companies. Our program helps founders achieve their next critical milestone through hands-on experiences, where they gain needed skills and education, develop deep mentor relationships, have investor introductions and prep for meeting investors, and grow a life-long network of peers across the world. We built Accelerator with three core values in mind:

"I truly accelerated my business. What would have taken me a year or more took me 3 months."

"A year ago I didn’t even know what Detroit Demo Day was. With the help of Backstage Accelerator, a year later I pitched on stage as a top finalist."

"I got support like no other from the Directors of Backstage London. I’ll never forget the love they showed us."

Bringing everyday investors into the ecosystemEdit

In 2020, we expanded our community to include emerging investors with the launch of Backstage Crowd, our funding platform where accredited and non-accredited investors can invest alongside us into underrepresented founders. Since launch, 55% of people in the Crowd are non-accredited. Like we provided access to venture capital for our portfolio companies, we are providing access, resources, and education for people who are interested in investing in startups.

Since launching in June 2020, more than $1.5M has been invested into 10+ startups, several of which are Backstage portfolio companies, and hundreds of investors have signed up. We believe that by bringing more investors into the ecosystem, we will continue to diversify the tech landscape, and more can benefit from the wealth generated by startups.

Creating a world of opportunity for underserved foundersEdit

Our focus on helping people of color, women and LGBTQ+ fund their businesses means that we are redefining the manner in which these companies succeed.

Backstage Capital aims to create a world in which underserved founders have readily accessible capital in order to build tomorrow's leading companies.

I invested because as a co-founder of a female-founded company, I know how hard it is to have your ideas validated and funded by traditional investors. I believe in Arlan and her team (and hope to have them on our cap table one day!) and how they're supporting innovation by not leaving more than half of our nation's greatest minds out of the room.

I want to see the funding gap for women, people of color, and LGBTQ+ disappear, and Backstage Capital with Republic just makes sense to invest in to continue to support the under represented in their journey!

Arlan Hamilton (Founder and Managing Partner) has been featured on the cover of Fast Company magazine as the first Black woman non-celebrity to do so, and is the author of “It’s About Damn Time” and host of the weekly podcast “Your First Million”.

Christie is a General Partner at Backstage Capital, where she is an active startup investor, and leads Backstage's global Accelerator.

Brittany is a General Partner at Backstage Capital, where she brings experience sourcing early-stage ventures for investment, conducting diligence, and managing an investment pipeline.