BlackRock Latin American Investment Trust’s (BRLA) two experienced managers, Ed Kuczma and Sam Vecht, remain positive on the outlook for Latin American equities, with Kuczma commenting that the region is ‘under-owned, undervalued and unloved’. He says that the year-to-date stock market rally in Latin America is a good example of how quickly investor sentiment can change, especially given the global environment of rising interest rates. Kuczma points to the move from growth to value stocks, commenting that the region ‘has a ton of value’.Title: NAV in line with the benchmark over 10 years to end-February 2022 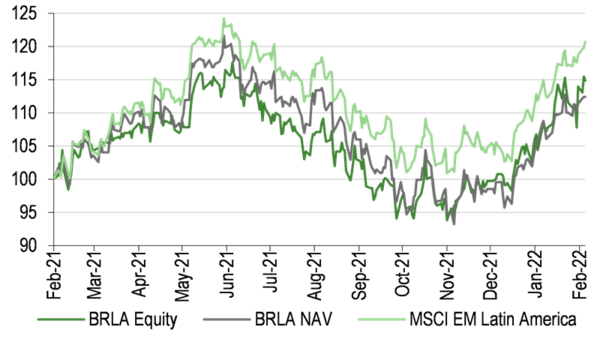 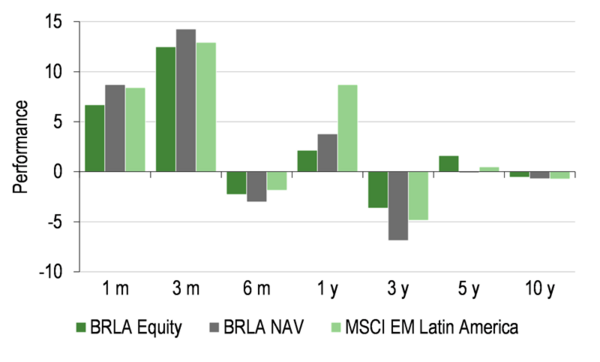 Source: Refinitiv, Edison Investment Research. Note: Three-, five- and 10-year performance figures annualised.Discussing BRLA’s recent performance, Kuczma says that Q421, and December in particular, was ‘tough’; however, markets rebounded in January 2022. As an example, B3, one of the trust’s top 10 holdings, had a horrible December but a strong January as its stock had become oversold. The manager explains that from last July to the end of 2021 there were significant interest rate hikes in Latin America. During this time, the whole equity market, especially Brazil, performed very poorly. As a result, Kuczma says the region is very oversold and under-owned. However, in January 2022, foreign investors started to realise how attractively valued Latin American equities are, and that political risk is likely already priced in to stock prices.One of BRLA’s holdings that has performed well is Peruvian financial company Creditcorp. Its stock price was heavily discounted prior to the presidential election, and the position was initiated at a depressed valuation. The opposition party could block political reform in Peru, so Credicorp’s stock price re-rated and the company has benefited from higher interest rates. Copa Holdings has also done well. On the negative side, Notre Dame Intermedica Participacoes has been weak as there have been domestic redemptions in Brazil and the company’s medical loss ratio has risen. Business has shifted towards COVID-19 related activity at the expense of more profitable elective surgery; Kuczma believes that this is temporary and should resolve itself as the pandemic eases.{| class="wikitable sortable"|+ Exhibit 6: Share price and NAV total return performance, relative to index (%)|-!  !! One month !! Three months !! Six months !! One year !! Three years !! Five years !! 10 years|-| Price relative to MSCI EM Latin America || 0.3 || 1.4|| 3.1|| (5.5)|| 2.0|| 6.4|| 1.7|-| NAV relative to MSCI EM Latin America || (1.1)|| 1.2 || (2.4)|| (6.2)|| (6.2)|| (2.8) | (0.8)|}Source: Refinitiv, Edison Investment Research. Note: Data to end-February 2022. Geometric calculation.Looking at BRLA’s relative performance in Exhibit 6, its net asset value (NAV) is modestly behind the benchmark over the last decade, while its share price has outperformed over the last three, five and 10 years.== Tender offer announced ==On 4 January 2022, BRLA’s board announced, as part of the trust’s discount control policy, a tender offer for 24.99% of its issued share capital (excluding treasury shares). We believe that this liquidity event should help to narrow BRLA’s discount. The board previously stated that a tender offer would be made at a price of the latest cum-income NAV minus 2% and related portfolio transaction costs, if over the four-year period from 1 January 2018 to 31 December 2021 (the calculation period), either of the following conditions were met:* BRLA’s annualised NAV total return did not exceed the benchmark’s annualised US dollar total return by more than 100bp over the calculation period; or* BRLA’s share price average daily discount to cum-income NAV exceeded 12% over the calculation period.As at 31 December 2021, and over the calculation period, BRLA’s NAV had underperformed the benchmark by 94bp pa (failing the first condition) and the average share price discount to cum-income was 11.65% (passing the second condition).As a result, the board intends to make a tender offer; the structure will be decided by the board and a circular containing further details will be published in due course. It is anticipated that the requisite resolution to implement the tender offer will be put to shareholders for their approval at a general meeting, to be held immediately after the next AGM, which is provisionally scheduled for 19 May 2022. The tender offer will be conditional, among other things, on BRLA having the required shareholder approval and sufficient distributable reserves to repurchase tendered shares, and the trust’s continuation vote being approved at the AGM.