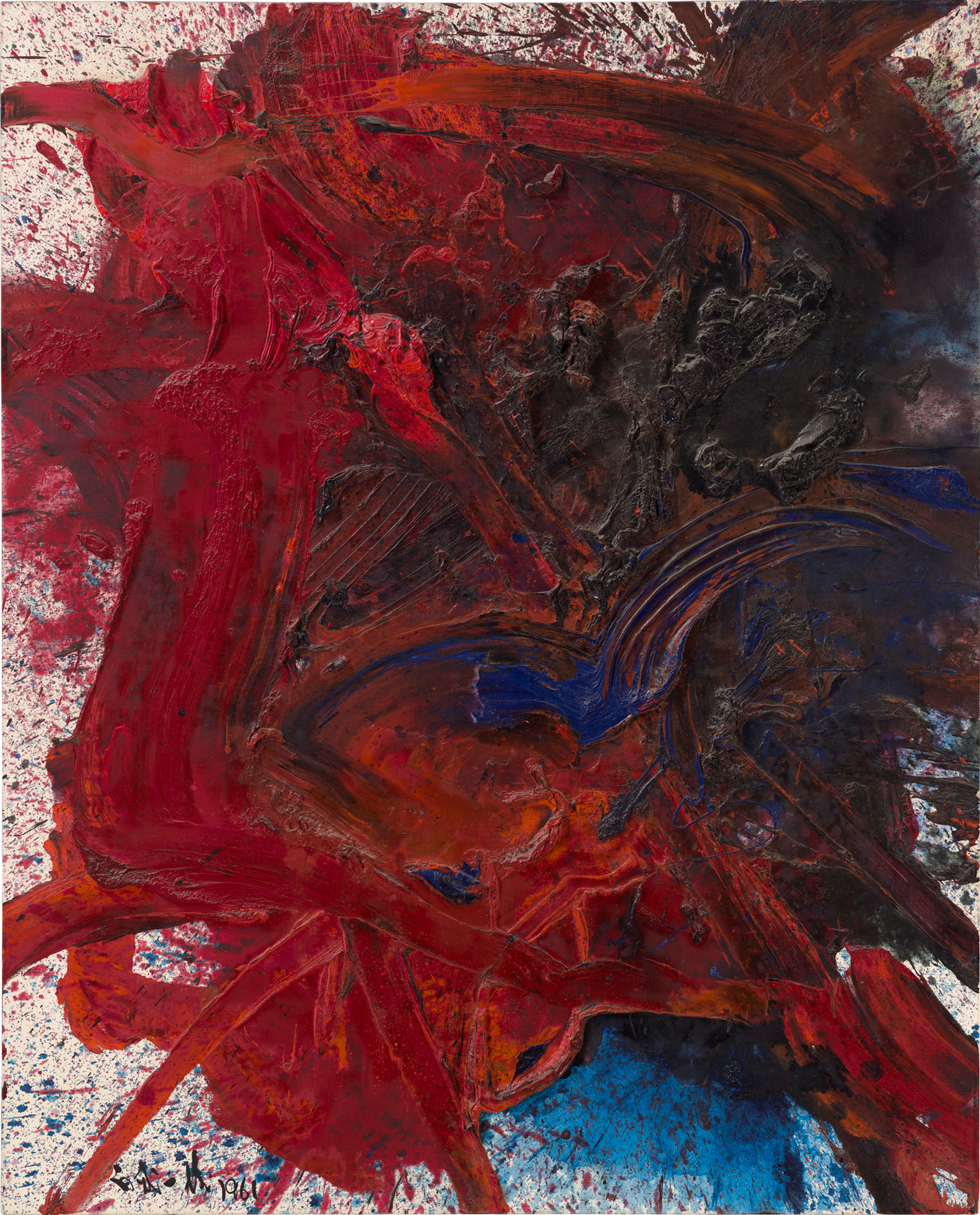 Kazuo Shiraga was one of the most influential Post-War Japanese artists, renowned for his integration of performance and painting.

The Painting is an excellent example of Kazuo Shiraga’s seminal body of work, the “Water Margin” series, known for heavily impastoed action paintings executed primarily in a rich palette of deep reds, black and blues. The series began in 1959, when Shiraga broke with the dominant Gutai practice of naming paintings simply as Sakuhin, or “Work”, and began to title his works after the heroes of the Water Margin, one of the great novels of Chinese vernacular fiction. The Painting is titled after Yù Băosì, a chivalrous outlaw nicknamed “Healthy Star God of the Dangerous Road” for his commanding stature. The Painting was created in Shiraga’s uniquely physical manner of execution, where the artist steadied himself with a rope suspended above a canvas slathered with oil paint directly from the tube, painting using his feet with acrobatic gestures. The majority of works from the series were created between 1959 and 1965, predominantly in typical French canvas sizes measuring between 63 by 41 inches and 102 by 76 inches - within which the Painting falls. The “Water Margin” series is regarded as central to Shiraga’s oeuvre, and works from the series rank among his most valuable and account for six of his top ten auction records as of February 17, 2021. Top auction sales from the series are led by Tentaisei Soushiko (1960) which sold for $7,423,486 at Sotheby’s in Paris on December 4, 2019, Keishizoku (1961) which sold at Phillips in New York for $3,973,000 on November 11, 2013, and Chijikusei Gotenrai (1961) which sold at Ketterer Kunst in Munich for €3,250,000 ($3,769,999). The Painting’s dynamic, impastoed surface, rich palette and date of execution make it an impressive work from Shiraga’s most desirable series.

In the later years of his life, Shiraga was recognized with numerous prestigious awards for his contributions to Japanese art, including the Hyogo Prefectural Cultural Prize for Excellence in 1987, the Distinguished Service Medal for Culture in 1999, and the Art Prize of Osaka City in 2002. Shiraga’s work has been shown twice during the Venice Biennale: in 2007 at an adjacent exhibition organized by Axel Vandervoot at the Palazzo Fortuny and in 2009 as part of the Venice Biennale’s Arsenale curated by Daniel Birnbaum. The artist has been the subject of numerous solo exhibitions, including “Kazuo Shiraga: Painting Born Out of Fighting”, organized in 2009 by Azumino Municipal Museum of Modern Art, which traveled around Japan to the Amagasaki Cultural Center, the Yokosuka Museum of Art and the Hekinan Museum of Contemporary Art. Shiraga was a central figure in the Guggenheim’s 2013 in-depth exhibition dedicated to the Gutai collective, and works by the artist have been included in group exhibitions at renowned institutions such as the Museum of Modern Art, New York, the Museum of Contemporary Art, Los Angeles, the San Francisco Art Institute and the Dallas Museum of Art. Kazuo Shiraga’s work is held in the permanent collections of the Metropolitan Museum of Art in New York, the Musée National d’Art Moderne Centre Georges Pompidou in Paris and the Walker Art Center in Minneapolis, among others. As of February 17, 2021, Shiraga’s auction records are led by Takao (1959) which sold for at Sotheby’s in Paris on June 6, 2018, for €8,731,400 ($10,285,492), Tentaisei Soushiko (1960) which sold at Sotheby’s in Paris on December 4, 2019, for €7,796,300 ($8,638,167) and Gekidou Suru Aka (1969) which sold at Sotheby’s in Paris on June 3, 2014, for €3,905,500 ($5,317,338).

Kazuo Shiraga (b. 1924, Amagasaki, Japan - d. 2008, Amagasaki, Japan) was an important Japanese Post-War artist, best known as a major figure of the Gutai movement. As a young artist, Shiraga was encouraged by his father to attend a Western-style painting club at the Amagasaki Middle School, in which he enrolled in 1937. Four years later, Shiraga began his studies at the Kyoto Municipal Special School of Painting, with a concentration in “Nihonga,” a traditional style of Japanese painting. Shiraga’s studies were paused from 1944 to 1945 when he was conscripted into the Imperial Army during World War II. After the conclusion of the war, Shiraga graduated from the School and continued his studies in oil painting at the City Art Center in Osaka. The artist began his experimentation with different painting techniques in 1953, when he started painting with a palette knife and his hands, and created his first paintings with his feet in 1954. In 1955, Shiraga exhibited with the Gutai group, an association of performative artists, for the first time with his seminal performance piece, “Challenging Mud,” where he physically moved through a pile of mud in order to form shapes out of the clay with his whole body. Thereafter, Shiraga began to focus on a new method of painting, where he held on to a rope above a canvas laid on the floor and swept paint around its surface with his feet.